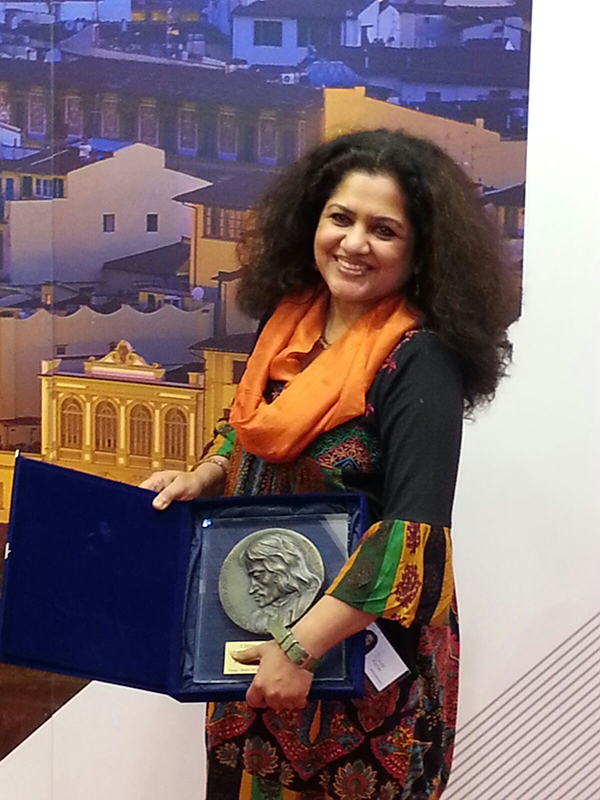 Dimpy Menon won the Lorenzo il Magnifico Bronze award at the Florence Biennale in October 2015, becoming the first Indian sculptor to do so. In all, over 450 artists from 64 countries participated. 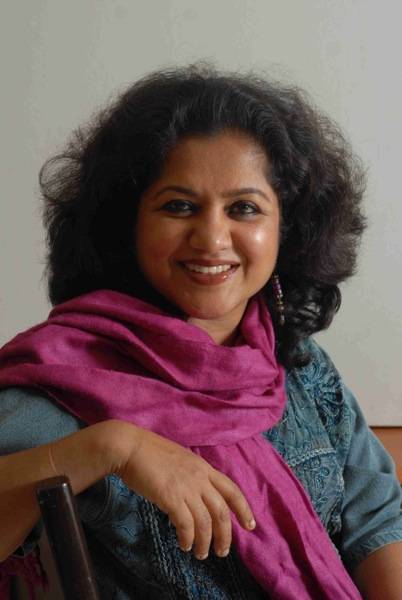 In 2010, the Oberoi Hotel at Nariman Point in Mumbai re-opened its lobby some 18 months after the terror attacks of 26/11 had destroyed it. The prominent change was a bronze sculpture by Dimpy Menon. The seven-foot composition showing a couple with their “arms unfurled in a gesture that portrays a welcome as well as freedom” has been described as “stunning” by the travel guru Mary Gostelow. CNN International told its patrons, “Don’t miss the sculptures by artist Dimpy Menon dotted around the premises and named, The Conversation, A Sunday Afternoon, and A Fine Balance.” These are among three of a dozen large sculptures of hers at the Trident in Bandra-Kurla. It is a sentiment echoed by the New York magazine Architectural Digest which has called Dimpy Menon one of the “biggest contemporary artists in India”

In Bangalore, Dimpy’s works are seen to the best advantage at the Alila where a single figure both delicate and powerful greets the visitor as he drives in. A spectacular composition (over 20 ft high) moving across the lobby from the ground to the ceiling takes the breath away. Dimpy Menon graduated top of the class from the College of Art, Chennai in 1986; the art critic Geeta Doctor writing in Indian Express was already commenting about her work thus: “Dimpy’s figures recall the spirit of the Renaissance Man best exemplified in Leonardo da Vinci. The way in which she expresses the concepts, however, is wholly Eastern.” Dimpy’s works are often large scale, as on the Anna Salai, Chennai where five large-as-life figures greet the public. It is Dimpy’s dream to create large sculptures in public spaces where they become a part of the city’s landscape.

There is a meditative quality to Dimpy Menon’s works arising out of a stillness that characterizes prayer, like the stillness at the eye of a storm. Although it is the human body that tells the story, the subtext of such poetry in motion is this stillness. “(The bronzes) are charged with energy,” wrote a critic recently, “Their dynamism stems from the force of a body language uninhibited by facial cues.” Dimpy introduces us to the potential in her figures that is at once tense and relaxed. It is the moment that is both the high point of motion and the beginning of stillness. Or vice versa. This balance is at the heart of her sculptures.

For Dimpy Menon’s philosophy of movement is equally a philosophy of the moment. Among its elements – since we are talking of the human body – there is grace, contortion, gentleness, abruptness, delicacy, control, and a slew of possibilities. This last is significant because Dimpy’s sculptures deal in processes rather than products. There is no finality. Things are in the present continuous. It is as if once the viewer turns away, the figures will continue on their way only to quickly assume their original stances when he looks again. You cannot catch these visual accidents off guard – just as you cannot catch yourself looking away when you stare at a mirror. The figures arrest your attention in the midst of distraction – some subtly, by appearing to relax on a seat when, for all we know, they might have just arrived there in a rush; others more obviously as in the act of falling. Quiet relaxation is at the other end of intense movement, and a part of it. Dimpy is the memorialiser of the moment, investing it with a significance beyond that moment, bringing to the action the history, the mood and the sheer playfulness leading up to it.

In Dimpy’s world, things just are. The works are remarkably non-judgemental, they stand for themselves and whatever the viewer makes of them. They do not arrive pre-packaged and demanding a particular set of reactions. It is a testimony to our collective consciousness that viewers often see in the works what the artist intends them to see; it is as much a tribute to the artist’s instinct for finding the common humanism that drives us all. What is intensely private thus becomes universal. This is another version of the play of forces that results in the balance here. Taken singly and in groups, the bronzes tell stories. The figures capture the moment just before something happens, or the moment just after the action. At either end of motion is stillness. The bronzes celebrate life, capturing the human form in an array of movements: complex, acrobatic and graceful. They are a tribute to the fleeting moments that resonate in our minds like a line of poetry or a bar of music. The rough granite bases play off against the metal, enhancing the richness of the bronzes Dimpy Menon, the memorialiser of the moment is equally the memorialiser of movement. Both are eternalized in the same work, and it is this balance, ultimately, that makes her bronzes unique. “The more you do,” says Dimpy, “The more there is to do.” Artists, poets, composers have all discovered this for themselves through the ages.